Nordpeis Inspiration No fireplace, no Christmas

No fireplace - no Christmas

What is Christmas without a fireplace? A grey and sad occasion, a dreary experience without magic or meaning. Imagine Christmas Day without that magical firelight falling over tired and happy children, over mothers who have finally taken off their finery, and over fathers who have sunk into their favourite chair with a good book and mince pies.

The fireplace is central to Christmas, whether it’s the flames dancing on champagne glasses, oyster shells, gold and glitter, or flickering in the blush shine of old copper pans in a small, ancient kitchen in the mountains. While through the window large snowflakes float down to make a soft landing for Father Christmas, his sleigh and Rudolf. Hush - can you hear jingle bells? No? That’s because you don’t have a fireplace.

Father Christmas - a whizz at delegating

What you don’t know is that Father Christmas wasn’t the first person to climb down the chimney. The story began with a Dutch saint, St Nikolaus, or Sinterklaas, as he was known. This saint recruited an assistant called Zwarte Piet, who worked in the same industry as Knecht Ruprecht in Germany, and Père Fouettard in France, the latter his archrival. These were tough times, and while St Nikolaus patted the heads of the small children, his assistant had the job of punishing the naughty ones in addition to the physically demanding job of climbing down the chimneys and delivering the sacks of presents.

In the 1700s, the Dutch took all of their Christmas traditions, including Sinterklaus, with them to New Amsterdam, later called New York. The author Washington Irving was so inspired by this story that, in 1809, he created the myth about St Nikolaus who rode through the air on a sleigh pulled by reindeer. This version captured the hearts of everyone, and soon after St Nikolaus became Santa Claus. In the process, his helper disappeared and Santa Claus had to climb down the chimney himself. When you know that this is founded on hundreds of years of tradition, it is easy to understand why fireplaces and Christmas are inextricably linked. Think of all those millions who over the years have hopefully hung up their stockings, excitedly waiting for a visit down the chimney during the night. Marilyn Monroe was only one of them! 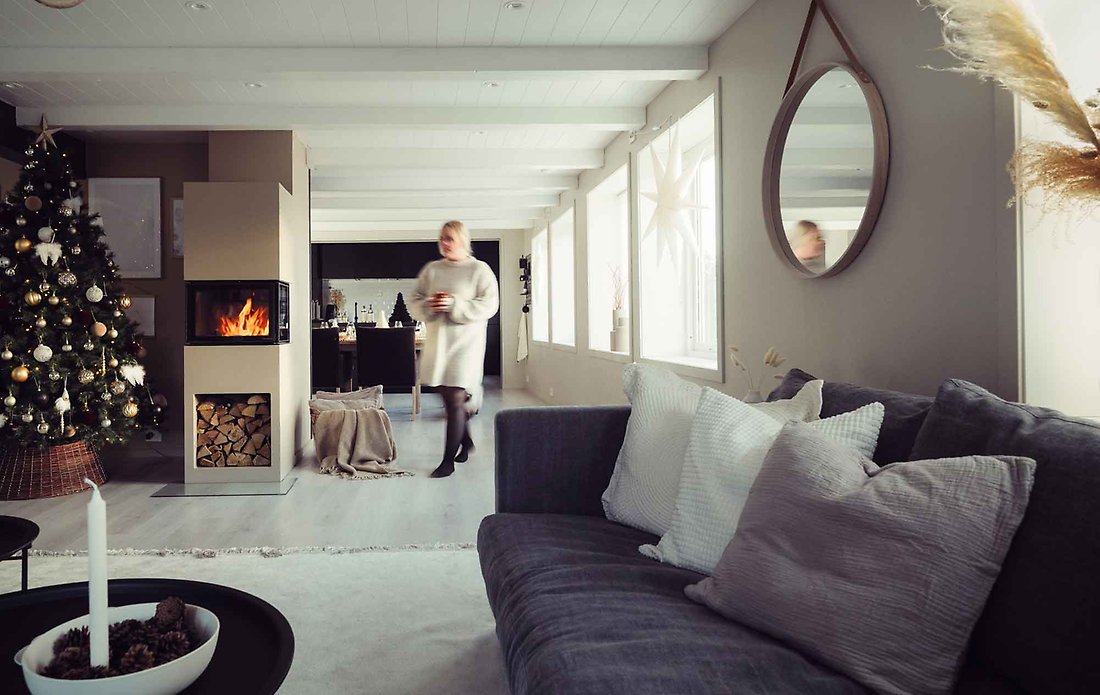 The Christmas Spirit since 1984

Nordpeis was established in Norway, in the middle of the 1980s by Morten Henriksen, a master builder. The idea was that everyone should be able to experience the flames burning brightly at Christmas, and not only the rich with their massive soapstone fireplaces in expensive villas. His fireplace concept with its fresh design and good prices were a success. These clean burning wood ovens and fires are now the top-sellers in Norway.

It costs less than you think to do as Marilyn – dab a little Chanel No. 5 on your skin, light a blazing fire in the fireplace, and wait for Father Christmas with your wish list from Tiffany’s. Here you can find the fireplace that will create that magical Christmas spirit in your home

Some good Christmas traditions by the fireplace:

And, last but not least, we know why some people don’t believe in Father Christmas. They don’t have a fireplace!